Scottish 48th HIGHLANDERS OF CANADA Feather Bonnet.  The 48th Highlanders of Canada was started in 1891-Present.  In overall good condition.

Ever since its formation in 1891, the 48th Highlanders have had a longstanding tradition of participation in the life of its parent city, Toronto. The regiment has participated in community functions for over 100 years, in addition to fulfilling its operational duties around the world. Since its inception, the men and women of the regiment have been among the first Canadians to step forward and answer their nation's call. Members of the regiment have served on Operation RECUPERATION, in the Golan Heights, Korea, South Africa, Cambodia, Cyprus, Bosnia, and Afghanistan to name only a few and of course, both World Wars and the Boer War.

A memorial was erected in Mount Pleasant Cemetery, Toronto sometime after 1912 in honour of two soldiers killed returning from a training exercise in 1912 and as a monument to the 48th Highlanders of Canada's veterans and war dead of the South African War.[1]

The regiment is nicknamed "The Glamour Boys" or "The Four Dozen". The name "The Glamour Boys" was coined by the other regiments that served with the 48th Highlanders during World War II in the 1st Canadian Infantry Division, 1 Brigade. The brigade was being inspected by King George VI but there were not enough regulation khaki puttees (leg wrappings) for all the soldiers. The 48th had to wear unofficial blue puttees. The King inquired as to why the 48th wore different puttees from the rest of the brigade. He was told that there were not enough khaki ones for all the units. The King replied that he liked the blue puttees better and that they should keep them. The 48th Highlanders continued to wear blue puttees until battledress was eventually phased out. The nickname "Four Dozen" is a play on The Dirty Dozen and "48" being equivalent to four dozen.

The regiment provided a Guard of Honour for the G7 summit in 1988, a full Royal Honour Guard for Queen Elizabeth II in 1998 as well as the Royal Winter Fair, annually. The Regimental Colour Party has marched in events as far afield as Prince Edward Island and the United States, and remains in great demand as a living example of the pageantry and gallantry of the Highland regimental tradition.

The regiment's Military Band and the Pipes and Drums have played at every Toronto Maple Leafs home opening game at both Maple Leaf Gardens and the Air Canada Centre. The bands were requested by Conn Smythe, who had been a major in the First World War, to play at the opening of the new Maple Leaf Gardens on November 12, 1931.

The regiment's motto is Dileas gu brath, which is Gaelic for "faithful forever". The regimental tartan is the Davidson, but pipers wear the Stewart of Fingask. The regiment's Colonel-in-Chief is Elizabeth II.

The camp flag of the 48th Highlanders of Canada 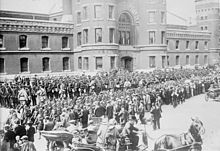 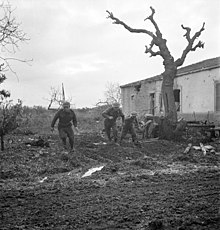 Riflemen of the 48th Highlanders of Canada 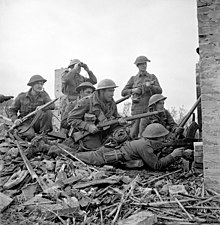 During World War II, the regiment mobilized the 48th Highlanders of Canada, CASF, on 1 September 1939. It was subsequently redesignated the 1st Battalion, 48th Highlanders of Canada, CASF, on 7 November 1940. It departed Canada for Britain on 16 December 1939, and on 13 June 1940, it went to France as part of the abortive Second British Expeditionary Force. The battalion reached Sablé-sur-Sarthe before being ordered back to Britain. It landed in Sicily on 10 July 1943 and in Italy on 3 September 1943 as part of the 1st Infantry Brigade, 1st Canadian Infantry Division. In March 1945, the regiment moved with the remainder of the I Canadian Corps to North-West Europe, where it fought until the end of the war. The overseas battalion was disbanded on 31 December 1945. On 1 June 1945, a second battalion of the regiment was mobilized for service in the Pacific theatre of operations, designated as the 3rd Canadian Infantry Battalion (48th Highlanders of Canada), CASF. This battalion was disbanded on 1 November 1945.[2]