A Good Antique (possible) 4th New York, A Company Heavy Artillery Regiment Civil War-Plains Indian Wars or GAR Kepi circa, 1860-1870's.  In stable overall condition with scattered mothing.  Federal Eagle buttons.  Leather chin strap is missing.  Top of kepi has "Crossed Cannons" and "A" and the front has "4" (4th Regiment, A Company).  The sweat band is missing.  The head liner is intact.  A great looking Kepi that looks the part ready for display.

Note:  There is conflicting information regarding the maker: "Raymold & Whitlock, 39 West 14th St. New York".  Depending on what book or internet source you read, some have this firm during the Civil War and some have it as post Civil War.  Exactly when this Kepi was made is anyone's guess.  Researching...

Some History on the "4th Heavy Artillery Regiment, A Company", Battery A - mustered in November 1861.

From Wikipedia, the free encyclopedia:

The 4th New York Heavy Artillery Regiment, U.S. Volunteers was a heavy artillery regiment that served in the Union Army during the American Civil War. The regiment operated as both heavy artillery and infantry beginning in February 1862 while serving in the defenses of Washington, D.C. and continued in both capacities until the end of the war. 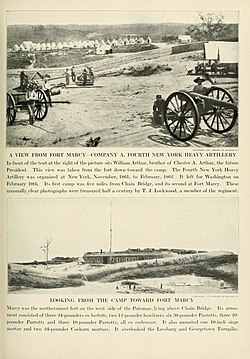 Ft Marcy with Company A 4th New York Artillery [Top picture] man at the right in front of the tent is William Arthur-brother of US President Chester Alan Arthur.

The 4th New York Heavy Artillery mustered out of the service at Washington, D.C. on September 29, 1865.