A Rare Antique French & Indian War - American Revolutionary War Period British Military Pattern 1738 Heavy Dragoon Flintlock Pistol, "TOWER", dated "1738". 11.75", .57 cal. round steel smooth-bore barrel with faint remnants of (2) Tower proofs, a small "CROWN" inspector mark on barrel tang and the barrel makers mark "F G" (Farmer & Galton, contractors to the Tower of London Ordnance).   The barrel has remnants of regimental marking engraved on the top portion of the barrel that may stand for "-- KING'S OWN DRAGOON GUARDS"?  The lock is marked; "TOWER", "1738", a "CROWN" over "GR" (King George II) and a small "CROWN" over the "BROAD ARROW" (Government ownership).  The frizzen spring has a steel platform built up to provide more spring.  Brass regulation furniture.  The pistol is in its original flintlock configuration.  Stock is marked with the "Stores Keeper" mark just above the tail of lock plate and a small "CROWN" over "7" inspector mark just above the edge of the right side of the trigger guard.  The stock has a stress crack at the wrist but is solid with normal scratches and dings from years of handling and service.   All steel surfaces have salt & pepper rust pitting (some areas worse than others).   Wood ramrod with brass tip.  19" overall length.  In good mechanical working order.  An excellent example of the most graceful and desirable of the British military pattern pistols and may have seen service in the French and Indian War, 1757-1763 and the American Revolutionary War, 1776-1783.

Note: The cock is a period replacement.  It is my opinion that the stock was made with two pieces of wood or the foreword 5.5" of the fore-end was repaired during the period of use and NOT a recent repair.  (see photos).

Additional Notes: This is a stretch but worthy of note that the Battle of Culloden was the final confrontation of the Jacobite rising of 1745. On April 16, 1746, the Jacobite army of Charles Edward Stuart was decisively defeated by a British government force under William Augustus, Duke of Cumberland, on Drummossie Moor near Inverness in the Scottish Highlands.  This pistol may have been there (who knows ?) 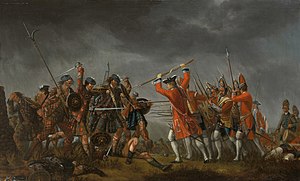