A Fantastic and large Antique 17th Century French Bronze Breech-loading Cannon, dated "1684".   High-relief raised "CROWN" over a "SHIELD with (3) French Fleur-de-lis".  2.75" smooth-bore.   The original bronze powder chamber is missing (most likely still on the shipwreck site !)  The cannon has been cleaned of most of the marine growth but still has green age patina and areas of marine growth with-in the tube.

NOTE; The wood carriage is new and made for display only.

Provenance: Unfortunately the information has been lost as to where this cannon was found...

This form of cannon was very popular in the 17th century.  We have encountered several of the same style and form made in different country's.

5" circumference at outer edges of muzzle.

The fleur-de-lis or fleur-de-lys (plural: fleurs-de-lis, or fleurs-de-lys) is a stylized lily (in French, fleur means "flower", and lis means "lily") that is used as a decorative design or motif. Many of the Catholic saints of France, particularly St. Joseph, are depicted with a lily.

Interesting Fact:  In 2010, A very similar bronze breech-loading cannon was discovered off of Sabastian Inlet on the East Coast of Florida that was part of the Spanish 1715 Treasure Fleet.  Salvaged by Gold Hound who is a subcontractor for 1715 Fleet-Queen’s Jewels LLC, which acquired salvage rights to the fleet from the heirs of treasure hunter Mel Fisher.  The inside of the cannon was hiding a cache of Spanish Gold and Silver coins !!! (approx. $500,000.00 in value !)

The cannon pictured below is the one recovered from the 1715 Treasure Fleet. 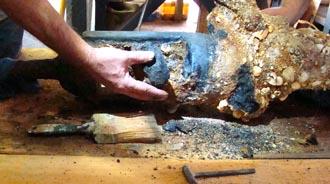