A Beautiful Edo Period Japanese Matchlock TANEGASHIMA Long Gun, circa. 18th century.  41.5", .58 caliber octagon steel barrel inlaid with decorative brass and silver.  All brass furniture (some pieces with decorative engraving).  The stock is solid with an area of loss on the upper left side of the fore-end (see photo).  The stock has very unusual decorative gold color paint overall.  52" overall.  An excellent and extremely attractive example in good mechanical working order.

NOTE: According to Wikipedia;

Tanegashima (種子島), most often called in Japanese and sometimes in English hinawajū (火縄銃, "matchlock gun"), was a type of matchlock[1] configured arquebus[2] firearm introduced to Japan through the Portuguese in 1543.[3] Tanegashima were used by the samurai class and their foot soldiers (ashigaru) and within a few years the introduction of the tanegashima in battle changed the way war was fought in Japan forever.[4] 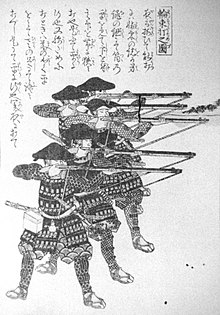 The tanegashima seems to have been based on snap matchlocks that were produced in Portuguese Malacca, at the armory of Malacca (a colony of Portugal since 1511), called an istinggar.[5] The name tanegashima came from the Japanese island (Tanegashima) where a Chinese junk with Portuguese adventurers on board was driven to anchor by a storm in 1543. The lord of the Japanese island, Tanegashima Tokitaka (1528–1579), purchased two matchlock muskets from the Portuguese and put a swordsmith to work copying the matchlock barrel and firing mechanism. The smith (Yaita) did not have much of a problem with most of the gun but "drilling the barrel helically so that the screw (bisen bolt) could be tightly inserted" was a major problem as this "technique did not apparently exist in Japan until this time." The Portuguese fixed their ship and left the island and only in the next year when a Portuguese blacksmith was brought back to Japan was the problem solved.[6] Within ten years of its introduction, over 300,000 tanegashima firearms were reported to have been manufactured.[7]

The Edo period (江戸時代, Edo jidai) or Tokugawa period (徳川時代, Tokugawa jidai) is the period between 1603 and 1868 in the history of Japan, when Japan was under the rule of the Tokugawa shogunate and the country's 300 regional daimyō. The period was characterized by economic growth, strict social order, isolationist foreign policies, a stable population, "no more wars", and popular enjoyment of arts and culture. The shogunate was officially established in Edo on March 24, 1603, by Tokugawa Ieyasu. The period came to an end with the Meiji Restoration on May 3, 1868, after the fall of Edo.